A workshop on SecurityCouncil Resolution 2250 youth vision towards a national youth,security&peace 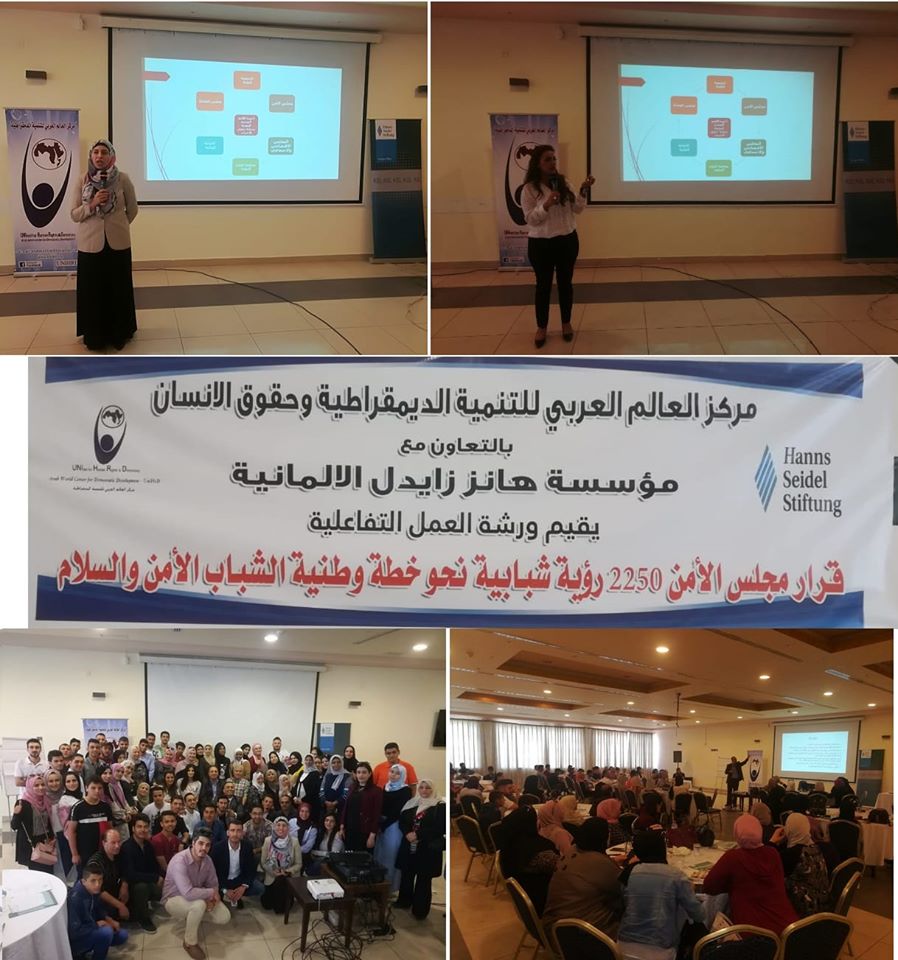 The Arab World Center for Democratic Development, in cooperation with the German Hans Seidel Foundation – Amman Office, held an interactive workshop on Security Council Resolution 2250 youth vision towards a national plan “youth, security and peace” with the participation of youth from different regions of the provinces of the northern region
Speakers at the workshop focused on international experts in human rights to address the decision in all aspects. Dr. Riyad Al-Sobh, Director of the Strategic Center for Human Rights, introduced a definition of Resolution 2250 and talk about the effective role that Jordan led the United Nations in reaching this important decision, which gives additional strength to the efforts of His Royal Highness and me Prince Al-Hussein bin Abdullah II pledged in the Amman Declaration on Youth, Peace and Security, and came out with a high desire to work Seeing youth in shaping public policies around the decision
The workshop stressed the importance of encouraging clear steps that obligate countries to enhance the role of youth in security and peace
The director of the Arab World Center for Democratic Development, Dr. Amira Mostafa, said that the center started work during 2004 and the center, in cooperation with the Hans Seidel Foundation, has been implementing many workshops and conferences since 2011
On the target group, Mostafa said our activities are diverse and target and address most of them youth and women, and focus on awareness and education, within the national plan
Project Manager at the German Hans Seidel Foundation, Mrs. Ola Al-Shraideh, spoke about the most prominent programs and projects implemented and supported by the Hans Seidel Foundation in Jordan, including political education in cooperation with the Arab World Center for Democratic Development, and sponsored by the Ministry of Political and Parliamentary Affairs

She considered the participation in the young workshop Dana Al-Shloul – a master’s media student at Yarmouk University, from her point of view that this workshop is one of the active workshops that talks about resolution 2250
She added this decision, which was absent from many young people
And his assertion on the importance of holding more workshops for young people on the subject, introducing them to its goals and clarifying its importance, and most of all taking their opinion on how to apply and effective methods to take decisions on and activate it

The young participant, Hamza Abu Abailah, praised the workshop and talked that the dialogue sessions with the youth are important, and this workshop did the dialogue and we stressed during the workshop as participants on the importance of dialogue with the youth, that the decisions are actions, not words, and serious participation in peace processes, participation in making decisions and expressing their views with all Freedom within the limits of democracy